Our Board has passed a Covid-19 and how to return policy.  You can find it here.

Please look in the "Announcements" section of this website, read the newsletter, and check our Facebook group for regular updates about how to take part in events electronically.  Staying connected in this way will be helpful in these times.  The zoom link for the service is here 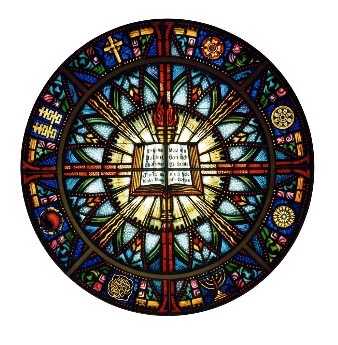 The chancel window was given in memory of Marion L. Crowell by Chester D. Crowell and his son and was dedicated on Easter Sunday, 1961.

The rich symbolism of the window can be interpreted in many ways, for the function of symbols is to point beyond themselves to that which can never be adequately expressed in words. Thus the window can be an ongoing source of inspiration and meaning of all those who view it.

Around the outer circumference of the window are the symbols of the world’s great religions. At the top to the left is the Cross of Christianity. The Cross, a very ancient symbol which predates Christianity, is often seen as symbolizing the Tree of Life. It, of course, also represents the means by which Christ died in order to give others new life.

To the right of the Cross is the Mystic Rose, as a Christian symbol, usually thought as representing the Virgin as the purest, most beautiful thing in the Creation; in addition, it is sometimes used as a symbol of Christ.

Next, as the view proceeds to look around the circumference in a clockwise direction, comes the Wheel of Doctrine of Buddhism; its eight spokes represent the noble eight-fold path which if followed, leads one to the outer circle of enlightenment.

Then comes the Lotus of Hinduism, another very ancient symbol representing the creative source of all being.

The next symbol is the Menorah of Judaism; its seven candlesticks can be seen as the seven branches of the Tree of Life, and its candles giving off the light of freedom and hope.

The Sacred Shield of Islam follows, with the Moslem creed inscribed upon it in Arabic: “There is no God but Allah, and Mohammed is His Prophet.”

The Yin-Yang represents Taoism, although it is also sometimes associated with Confucianism and Buddhism; it signifies that the contrasting sides of reality are not in conflict, but rather complement each other, giving rise to the creativity that leads to all existence.

Finally, there is the Double Ladder of Joy of Confucianism, with its five rungs suggesting the five duties that Confucius taught. The fact that these ladders are placed side by side, is symbolic of the great Confucian principal of reciprocity: “Do unto other as you would have them do unto you.” Thus the climb up the ladder is never made in isolation, but in the company of others.

The open book in the center of the window can be thought of as representing either the Judeo-Christian Bible or the sacred scriptures of all the great religions- the revelations of the past. The Torch behind it symbolizes the ongoing nature of revelation and the light of new truth- the revelations of the past and the future. The Maltese Cross, with its arms reaching out from the center of the window to the four cardinal points, serves to bind the whole together and symbolizes the inter-relatedness of unity of all Being.

The window in its entirety can be regarded as a symbolic representation of contemporary Unitarian Universalism – evolutionary nature, its inclusiveness, and its openness to all sources of wisdom and truth, both ancient and modern.